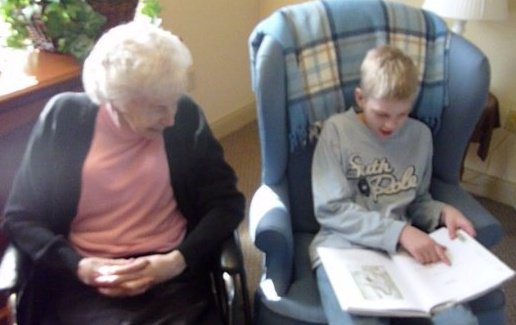 On a whim,  I veered north instead of west. My middle son’s appointment had ended, and the morning was nearly over anyway. He had brought along Frog and Toad. Why not stop by and read to Great-Grandma before lunch?

Taking this picture and recording his reading to her was a passing thought. I usually forget my camera. I suppose the granddaughter of someone with Alzheimer’s should know better than to rely on memory for recalling such moments. Something beyond my usual practice prompted me to capture this serendipitous, yet poignant picture six years ago today.

For how could I have known a month and a day later, on her eighty-sixth birthday, my beloved grandmother would have a stroke? How could I have perceived my own future need to preserve this encounter between her and my son after witnessing her passing into eternity on April 29, 2010?

For as long as I knew her, my grandmother’s daily prayer was for God to direct her to the person she needed to minister to that day. How could I have known God would divert my path on March 18, 2010 so we could minister to one another one more time?

Every day this week there has been something to commemorate: Pi Day, the Ides of March, John 3:16, and St. Patrick’s Day. I declare March 18 to be Divine Diversion Day. Just as I veered north that day not knowing the eternal “why,” God steered me in a divine direction today so I could celebrate this moment in my family’s history.

Let God divinely divert you today. You never know what future celebration He may have in store for you.

This site uses Akismet to reduce spam. Learn how your comment data is processed.